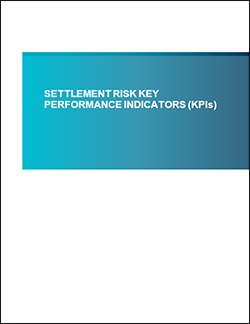 Settlement risk, in its simplest form, is the risk that one party won’t hold up their end in a transaction. There are several reasons this can occur, including time delay, system failure or default, and can also include risk associated with unexpected cost and/or administrative inconvenience.

This can be as simple as a transaction at an auto repair shop where, for example, the mechanic agrees to be paid after the work is done. In this case the shop is taking on the settlement risk that the customer will not make the payment as promised. Conversely, if the customer paid ahead of time, they take on the risk that the repairs may not be done, or not be done properly.

While the auto shop above might be sorely hurt by the loss of income from a single job, settlement risk is most prominent in financial exchange (Fx) transactions because daily settlement flows in foreign exchange clearing dwarf everything else. Historically, the biggest problems in settlements have occurred in currency trading.

Settlement risk, when applied to the foreign exchange markets is also sometimes called Herstatt risk. Privately owned Herstatt Bank in Germany gained the dubious honor of having their name applied to this risk in 1974 after being forced into liquidation at the end of the German market day and leaving some parties unable to collect on transactions in New York where it was still morning. Time difference issues became a large focus in settlement risk.

Since 1974 safeguards have been put into place at many levels of the financial infrastructure to avoid events like the Herstatt example, and yet the most important safeguards are the ones you monitor internally.

The document on KnowledgeLeader, Settlement Risk Key Performance Indicators, discusses the meaning of settlement risk, outlines business risks related to settlement and provides a healthy overview of considerations in this complicated and important area.

Some examples discussed include the following:

Credit Risk: The risk that a party within the system will be unable to fully meet its current or future obligations within the system. Imagine, in the auto shop example above, the shop calling the customer to let them know the car is ready and finding out the customer had been incarcerated or otherwise completely unable to fulfill their end of the transaction. It’s an extreme case, but it’s a good example of credit risk.

Liquidity Risk: The risk that a party within the system will have insufficient funds to meet financial obligations within the system as and when expected, although it may be able to do so at some time in the future. So, in this example, the customer might have been laid off and no longer currently has the funds to fulfill their end of the transaction, but is hoping to once they begin working again.

Operational Risk: The risk that operational factors such as technical malfunctions or operational mistakes will cause or exacerbate credit or liquidity risks. For this case, let’s turn the example around. Perhaps the shop has lost its license or has an equipment failure and is unable to complete the repairs they had already been paid to do. In that case, the customer suffers from the outcome of the operational risk.

Other types of risk include legal risk and systemic risk and are discussed in the document as well.

Settlement risk carries more impact than just loss of funds or value of the transaction. It can also include loss of customer trust, damage to brand and reputation, and cost associated with crisis management, as well as other business related risks.

In the auto repair shop example, consider the operation risk situation where the mechanic was unable to complete the job on time due to equipment failure. Auto shops depend heavily on word-of-mouth recommendations and would suffer greatly from the loss of customer trust and, if the customer made their displeasure very public, may have to engage in an aggressive promotion campaign to win loyalty back to their brand. This is a case where operational risk resulted in many layers of business risk outcomes.

Read further in Settlement Risk Key Performance Indicators for guidance to mitigate settlement risk through management practices and performance measures and important questions to consider. Because, whether your company is a small auto body shop or a multinational corporation trading on the foreign exchange markets, the risks should always be considered.

Other areas of interest on KnowledgeLeader related to risk include: